The Spectacle of Himachal

In the lap of the Himalayas lies the Godly state of Himachal Pradesh (literally meaning a land of snow) – a state that not only has most major Himalayan ranges passing through it, but also derives its name from the Himalayas (meaning a snowy abode). Amongst the many things that Himachal Pradesh is famous for – landscapes, temples, hot springs, perennial rivers, hill stations etc – the most important are the mountains, as they afford the region with not just its topography but also its climate and beauty. Mountains have a hypnotic quality about themselves. On one hand, their gigantic proportions, while mesmerizing, make us realise just how insignificantly small and frail we are. On the other hand, their unwavering stillness takes away the constant chattering of our mind, allowing us to pause and reflect upon the tranquility -  something absent in our hyper-connected lives otherwise. Bright blue skies, long winding roads, a crispy golden sun, green pastures, pristine flowing water and snow covered peaks make up the view across most of the state, offering a poetic rendition of the vivacity of nature.

Quaint but not quiet
Our quest for the quaint and an unending desire to escape the hustle-bustle got us onto a flight from Mumbai to Chandigarh. An eight-hour drive (including halts for lunch and refreshments) on wide concrete roads followed by an ascend on narrow but still concrete roads brought us to our first destination – Mcloedganj, a tiny suburb of Dharamshala, which also happens to be the headquarter of the Tibetian government-in-exile. This wonderful drive ended in to a long traffic jam and a congregation of people at a junction of five lanes, quashing all hopes of quaint and hustle-free. It is only the next day that we realized that the junction – called main square – was the actually the centre of action at Mcloedganj (and probably represented the entire suburb as far as tourists were concerned).

To give you a sense of the place, if you were standing at the main square such that you were not facing any road, but facing the valley, then about a kilometer to your left would be the Tibetian Musem / Dalai Lama Temple, a similar distance to your right would be the Namgyal Monastery / St. John in the Wilderness Church, whereas about 2kms behind you would be the Bhagsu Nag waterfall. These are mostly the touristy places that you would visit in Mcloedganj. Other than that, most people hang out around the square to shop and eat. 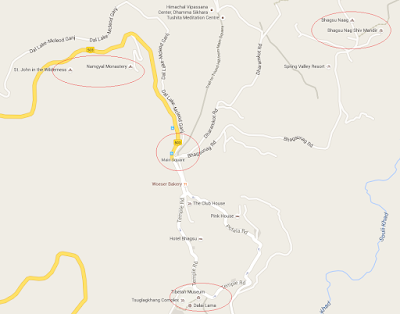 The Shiva trilogy – Water, Food, and Substance
What most tourists do not cover are the most interesting things that Mcloedganj has to offer, and both involve a fair bit of hiking. The first is a small hike that starts at the Bhagsu temple – usually where the visit ends for most tourists. The Bhagsu temple has a pond whereby an underground spring delivers water from the melting glaciers. This is the main attraction for tourists as the pond is open for a people to dip in. Once you walk past this gory site (most men strip down to bare minimum clothing), you come across the beautiful Bhagsu waterfall. From here you can hike up either along the waterfall (in dry season) or along a paved trail to the top of the waterfall. There are a number of small eateries on the way, but the best one is at the top of the waterfall - a charming little place called Shiva Café. 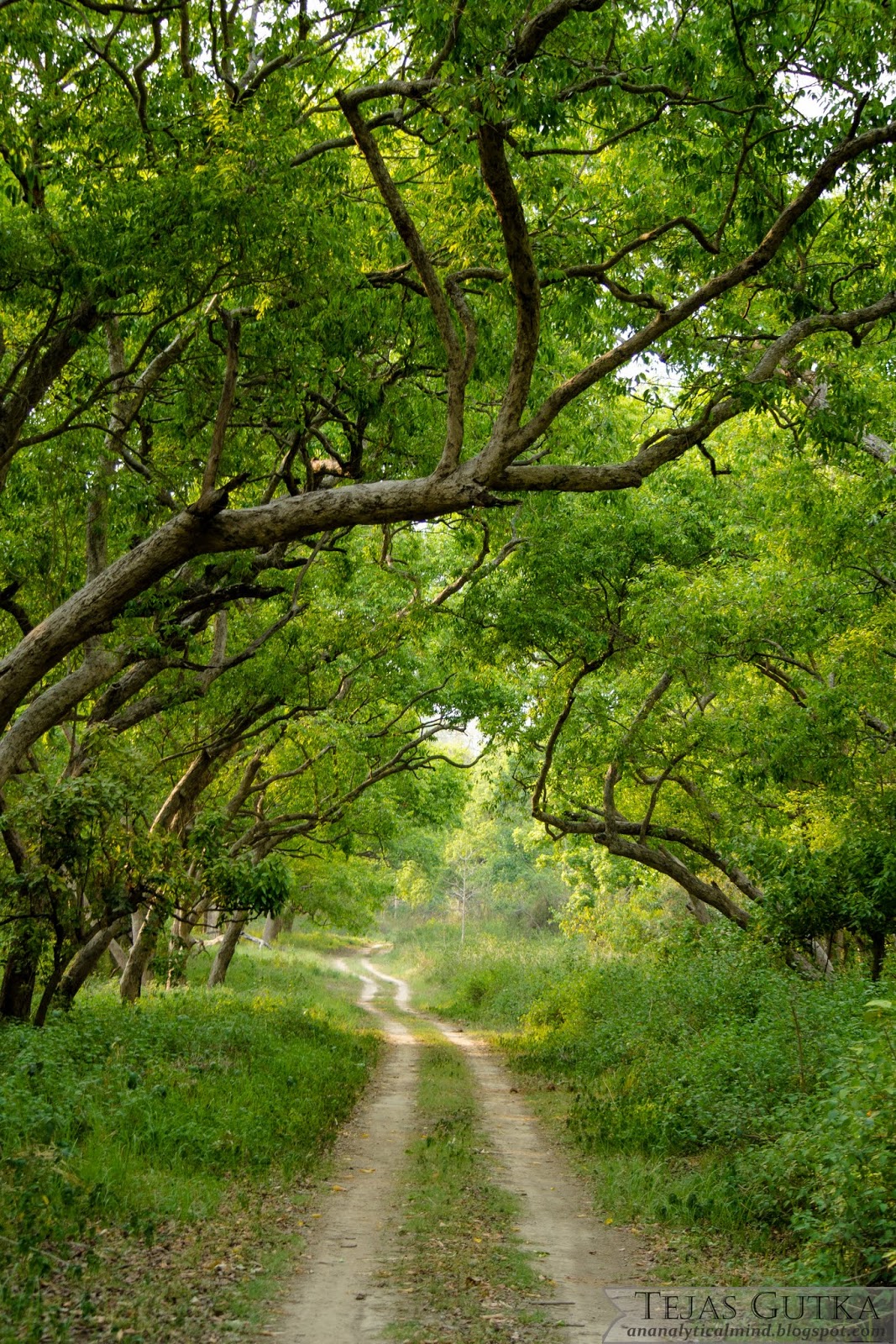 Wildlife trips are never short of uncertainty, excitement and, at times, disappointments. Sometimes, however, uncertainty can turn the excitement in to a big disappointment even before the trip starts. While Ranthambore was an all boys escapade, Corbett was going to be a family trip. One fine morning, a few days before leaving for the trip, the missus called from office, and in a very low voice, informed that she would have to cancel the trip due to some last-minute commitment at work. After a lot of deliberation (and some persuasion) we finally decided that she would stay back and the rest of us would carry on with the trip (part of the reason behind this decision was that none of our bookings were refundable!!). This led to another problem though!! While the two couples and their kids were booked at Club Mahindra in Corbett, the missus and me had planned to stay at The Wild Crest which was around 5kms away from the Club Mahindra property.

As it turned out, this was not that big a problem after all. One, the couples were more than accommodative and hosted me at their place for a couple of nights; and two, I like having some space to myself. We had pre-booked our safaris through a gentleman who is supposedly well known for his knowledge and tracking skilss - Mr. Ramesh Suyal. I had read about him online and was really impressed with what people had to say about him; plus his charges were reasonable and in line with what the hotel and others had quoted. I had left the choice of the safari timings (morning/afternoon) and zones (there are five). He advised that we do mostly afternoon safaris as the chances of spotting are higher around evening, and that we focus on the Bijrani zone that has the maximum density (the best zone is Dhikala, however you cannot enter that zone unless you are staying in the Government-owned Forest Rest House there - highly recommended that you stay there; we couldnt as bookings are done well in advance and we were late). We ended up booking two morning safaris as we also had interests in birding and early morning would be the best time to spot these little beauties. 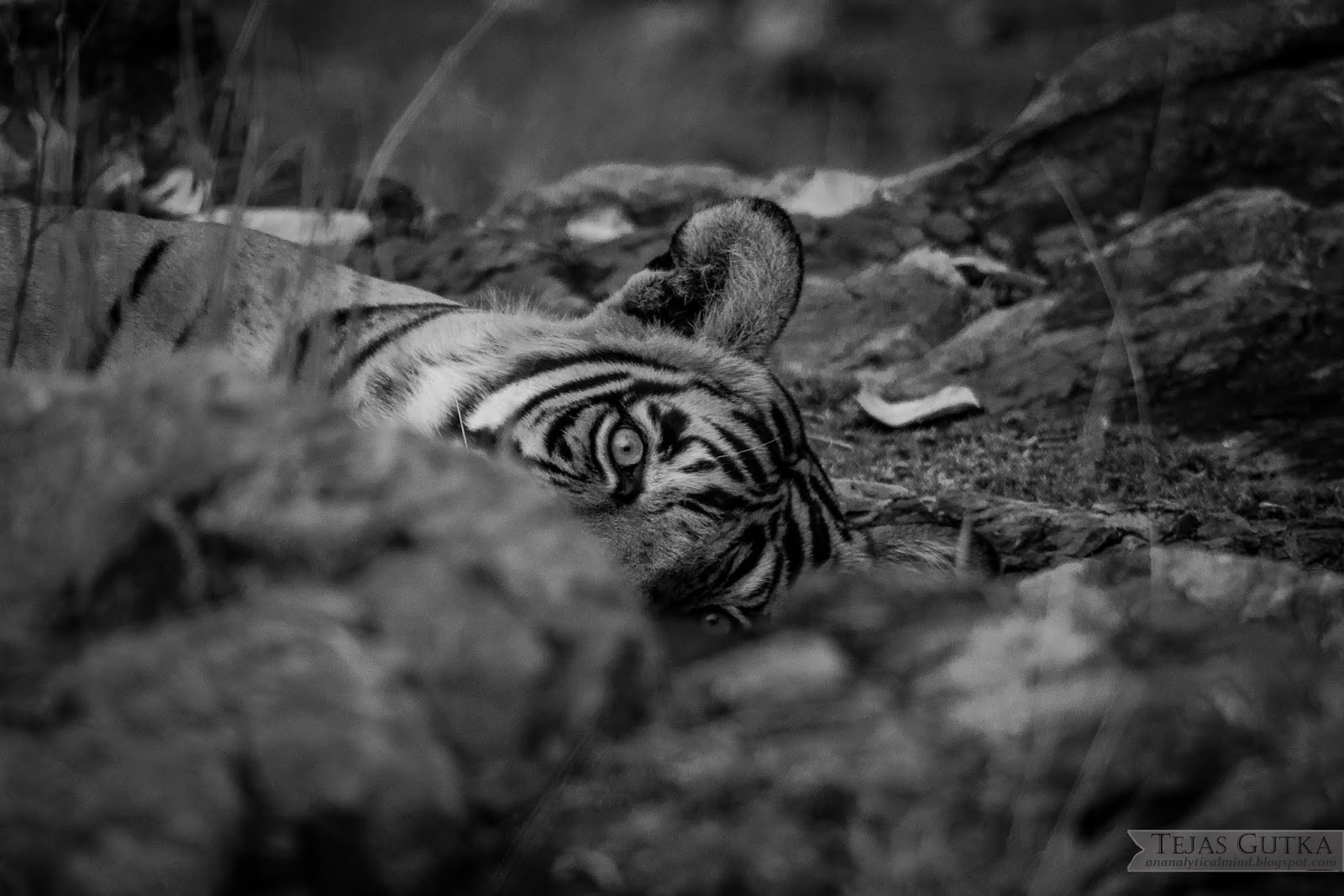 Well, to be honest, the original plan was to go to the very famous Tadoba Tiger Reserve, however, do to unavailability of safari permits, we decided to go to The Ranthambore National Park. A tiger lover paradise, the Ranthambore National Park is one of the largest national parks in northern India. This approximately 400 sq km forest is said to have housed around 50 Tigers once, however, that number is lower now due to poaching - an activity witnessed in almost all big and small forests in our country. Not just the density of tigers, but this park is also known for housing some of the most ferocious wild cats, that have fancy names and even more interesting stories. For instance, one of most recited stories of this park is how Machali (T-16), the royal tigress, fought with a 14 foot long crocodile. And mind you, this is not the only story that you will hear about Machali or the tiger reverse.

This was our first group trip to a jungle; hitherto we had always booked private jeep safaris for the two-three of us friends. However, this time around we decided to join a group being led by one of our most trusted wild life travel arrangers - the guys at Junglelore. Over a long weekend, these guys were taking two groups of around 25 individuals each in a canter (roofless bus) for a group safari. While we were a little anxious and apprehensive in going along with so many people - for a number of reasons: a) it is simply inconvenient to take photographs with 20 other people trying to do the same, b) the canter is generally higher than a jeep and thus you cannot photograph the animal from the eye level, c) more people = more noise (or chaos), and d) we feared that not everyone may be interested in wildlife other than the tiger and that would spoil our chances of photographing birds. Thankfully, none of that was true and it was a fun group to be part of, with enough opportunities to photograph birds and animals alike. In fact, we think that these group trips are a good way to ensure that you can do multiple jungle trips in a season on a tight budget.

OF Disappointments and Unfairness of Life

Disappointments have a special way of showing up just when you don't need them most. That is the first thought to cross my mind as I watched the train leave the platform. We were supposed to be on that train; however, we could only watch it with dismay from across the tracks. It was a holiday that we had been looking forward to for a very long time; I kept thinking as we dragged our bags back home. If only we had left five minutes earlier, if only there wasn't that much traffic on the road, if only the cabbie had taken a different road; if only...this hadn't happened to me.

Even if this had to happen, I wish it wouldn't have happened today. No!! how could we have missed THIS trip!! The mind wouldn't stop calling this unfair and curse life for being unjust at times. 'At times?!?!'...a second thought smirked its way in. 'Are you not lucky that life is unjust to you only at times. Don't you feel lucky to have so many things come so easily to you?' An image hurried across my mind.

Every time I passed through the market to pick to the missus, I saw this couple sit near a turning. Weary faced, probably in their 80s, this couple sat by the road selling petty things like combs & draw strings; things that don't cost more than 5-10 bucks and things that you would buy only occasionally. How much would they be making daily? 50-60 bucks? or 100 at best? I wonder how fair life would feel if at 80 you are to sit on the road daily to earn 100 bucks in an expensive city like Mumbai.

A Wild Nesting (Wildernest) In Goa

"The real voyage of discovery consists not in seeking new landscapes, but in having new eyes."


Think of a holiday in Goa and the mind immediately renders images of  serene beaches, clear waters, cheap booze(!!), bike rides and wild parties. Never does one imagine hilly terrains, gushing waterfalls, winding roads and wild creatures. However, just like the country that the state resides in, Goa offers much diversity beyond beaches, booze and minerals. Owing to its location between Maharashtra and Karnataka a part of the Western Ghats passes through Goa, providing a biodiversity to the state.

The Western Ghats frame the Eastern and Western borders of Goa, and stretch into Karnataka. Somewhere in the midst of these hills, on a road connecting the capital of Goa - Panaji - to Belgaum in Karnataka lie two secluded natural abodes - Swapnagandha & Wildernest. Nestled 700-800 metres above sea level, these eco friendly resorts are concealed by thick forest covers and offer beautiful views of the forest, valley and a couple of majestic waterfalls. Staying close to nature while offering all the comforts of modern living (except air conditioners) is the key attraction of these mostly word-of-mouth publicised resorts. Guests are logged in to mostly similar looking eco-friendly wooden cottages, with the difference being mostly the view offered from these cottages (one of our rooms had this magnificient view of a pair of 143 mtrs waterfall). While the cottages are eco friendly and made out of wood, they offer enough comfort and amenities for a good stay, with the only exception of an air conditioner.